For years my mother had a pair of sharp, metal scissors she kept in a porcelain plaque on the wall. The plaque had a cutesy saying on it, something like - These are my scissors in the rack. If you borrow them, put them back. That’s not the saying verbatim, but you get the idea.

I used to tease my mother about how possessive she was with those scissors. I mean, come on, they were just scissors, and my mother was not the kind of person who paid a great deal of attention to material possessions. But she really liked those scissors.

Guess who has those scissors now? After Mom died, it fell to me to be the last one to turn out the lights in her house. I almost left the scissors in the rack on the wall, but at the last minute I brought them home. I left the cutesy rack behind. The scissors are now kept in a wooden block for knives on my kitchen counter. At the bottom of the wooden block is a perfect slot to slide the scissors into. I use those scissors so often. Who would have guessed? And every time, hearing my mother’s voice in my head, I put them back.

My scissors have gone missing, and no one dares admit they were the last one to use them. At least twice a day, or so it seems, I reach for those damned scissors and they’re not there. And each time I get annoyed all over again. If my mother is watching from…wherever, I know she’s laughing at me.

I came across a few lines of a beautiful poem in Louise Penny’s newest mystery book, That's How The Light Gets In. I wish I could quote that poem to you, but I’m not one hundred percent sure who to attribute it to. Anyway, the poem talks about how although her mother is dead and buried elsewhere, as mine is, there are still lessons to be learned from her. The poet says it so elegantly that her words keep circling in my brain. I love the idea, that on some level, my mother is still with me.

So, the hunt is on. I’m not giving up until I find those scissors, and they’re back where they belong. Maybe I should offer a reward. I wonder what my mother would do.
Posted by Kate at 07:58 No comments:

My book, Sleight of Hand, is one of ten books being sold in a bundle for 99 cents. Hard to beat that deal!

Here's the Amazon link. Romance Super Bundle  We hope to have the bundle up and running at Barnes & Noble and itunes by Monday.

Please stop by and say hello.There's a good chance you'll win something!

I'd like to intorduce to the authors in the Romance Super Bundle, with a short synopsis of what their book is about.

Touched by Death – Dale Mayer
Death had touched anthropologist Jade Hansen in Haiti once before, costing her an unborn child and perhaps her very sanity. A year later, determined to face her own issues, she returns to Haiti with a mortuary team to recover the bodies of an American family from a mass grave–only to find the grave holds more than expected–and Jade finds herself confronting death and terror once again. And the man who unexpectedly awakens her heart is right in the middle of it all.

There’s Only Been You – Donna Marie Rogers
Two weeks after Mike Andrews disappeared from her life, Sara Jamison discovered she was something she never expected to be–an unwed pregnant teenager. With the love and support of her annoyingly alpha-male family, she's made a good life for herself and her young son. Sure, she works too hard and her social life is nonexistent, but for the most part, she's content–until the day Mike walks into her bakery and back into her life.

Stardust Miracle – Edie Ramer
Becky Diedrich is the cheesemaker's daughter, the minister's wife, the good sister. What she's not is her own woman, what she can't be is a mother. And then she catches her husband with another woman, and she moves in with her sister, and she starts to see sparkles. And this is just the beginning...

Meant for Her – Amy Gamet
A fiery homicide leaves Navy investigator Hank Jared with just two clues: an encrypted message and a name, Julie X. Trueblood. Shadows from the past surround Julie, and Hank finds the perfect place to hide her, right by his side at his sister’s wedding.  Now he just needs to remember their relationship is all an act, while she works to decode the message that could save both their lives or tear them apart forever.

Rogue’s Hostage – Linda McLaughlin
Mara Dupre is taken captive by a French and Indian War party that killed her husband and destroyed her cabin.  She longs for her freedom, but her captor has other ideas. Lt. Jacques Corbeau's desire for his hostage threatens what little honor he has left. When Mara offers her body in exchange for her freedom, it may be his undoing. Will Mara find her way home, or realize she is already there?

Sleight of Hand – Kate Kelly
Suddenly suspected of stealing half a million dollars of original paintings, Chance Spencer can't afford to have the FBI delve too closely into his covert past. When one agent in particular endeavors to put him behind bars, Chance coerces the real thief's daughter, Sarah O'Sullivan, into helping him flush her wily father out of hiding. But his plan quickly deteriorates when the stakes for his freedom soar. How can he ruthlessly use the woman with whom he's falling in love?

August Unknown – Pamela Fryer
She doesn’t know what happened the night of the storm, why she was walking along the highway without ID, or why she has a fading tan line on her wedding ring finger, but a dark and terrifying presence haunts the edge of her memory. Before she can start a new life with the wonderful man who came to her rescue, she must remember what in her past might take her away from him.

Love, Lies and a Double Shot of Deception – Lois Winston
Life has delivered one sucker punch after another to Emma Wadsworth. The poor little rich girl is the ultimate poster child for "Money Can't Buy Happiness"–even if she's no longer a child. So when Philadelphia’s most beloved citizen becomes the city’s most notorious criminal, she needs to do a lot more than clear her name if she wants to save her budding romance with the billionaire hunk someone is willing to kill for.

Hard Target – Barbara Phinney
Military policewoman Sgt. Dawna Atkinson has worked hard for her embassy posting, even while taking the blame for a shared indiscretion with her instructor, Tay Hastings. But when her embassy is bombed and Tay arrives to assist, she refuses to trust him again. Still, as the investigation and their growing attraction heat up, Dawna has the choice to trust Tay or risk the lives of everyone around them.

Jesse’s Brother – Wendy Ely
One woman, two men: a single summer to choose between them. Sacrificing a summer to fix her relationship with her mother and find out what’s troubling her father isn’t so bad...right? Wrong. Or so Samantha learns upon her return to Portland. As if family drama wasn’t bad enough, first comes Noah. Then comes Jesse. Will Samantha be able to choose between the men before their secret crushes her?
Posted by Kate at 12:23 No comments: 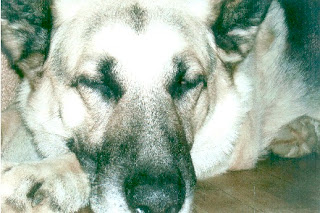 I have never used a real person as a character in my books. My characters take on personalities of their own, and although bits and pieces of people I know may slip through, basically, I make it all up.

Except for Romeo. It gave me great pleasure to write about my old German Shepard. I say my, but like most pets, Romeo was a member of our family. He was our dog. And what a great dog he was. Loving and kind and strangely moody sometimes!

He had a fetish for moving car tires, which I found advantageous because people thought he was an attack dog when they pulled into our isolated farm. But he was just chasing tires. We didn’t believe the lady from the power company when she accused Romeo of giving her flats until he sunk his teeth into the wall of a friend’s tire right in front of us.

Truthfully, other than tires, the only thing I ever saw him attack was bumblebees. Not sure what that was all about!

The thing I found most amazing about him was during a period when I was very ill, he’d stay close to my side while I went for my daily walk in the woods. But as I started to recover, he strayed further and further until he resumed his usual habit of chasing rabbits and treeing porcupines. I never did understand how he knew when I needed him close and when I didn’t.

He died of old age a few months before we sold the farm, and we buried him under the big, old pines trees. His death seemed fitting at the time. The old adage you can’t teach an old dog new tricks is probably true, and he could be stubborn when he chose to be. Leaning to live around traffic and strangers would have been difficult for him. I think he’s where he belongs.

And now, for a few pages, I’ve brought him back to life!

I hope you enjoy When Adam Came to Town and Romeo’s part in the story as much as I enjoyed writing about him.


When Adam Came to Town should be in stores this coming week. I admit I drop by one or two stores to see my book on the shelf. It's quite a thrill!

Romantic Times has kindly reviewed my book. They gave the book 4 stars! (Forgive me. It's an exclamation mark kind of day.)

"When Adam Came to Town offers a refreshingly light writing style and a nicely paced story. Kelly does a really nice job depicting character issue. Sylvie's panic attacks and her worry over not being able to paint and Adam's worry over his past both ring true — without their inclusion being at all heavy-handed."

I listed the on-line links to buy the book below.

I would love to hear from people what they think of the book. kate@katekelly.ca